We studied the performance degradation of graphite/LiNi1/3Mn1/3Co1/3O2 (NMC) lithium ion cells, charged and discharged up to 300 cycles at different operating conditions of temperature and upper cut-off potential (4.2 V/25 °C, 4.2 V/60 °C, 4.6 V/25°) using a combination of electrochemical (EC) methods with X-ray diffraction (XRD) as well as neutron induced Prompt Gamma Activation Analysis (PGAA). With PGAA we could exactly quantify the amount of transition metals Ni, Co and Mn which dissolve from the cathode and deposit on the anode. Combining the methods we could differentiate between different capacity degradation mechanisms. 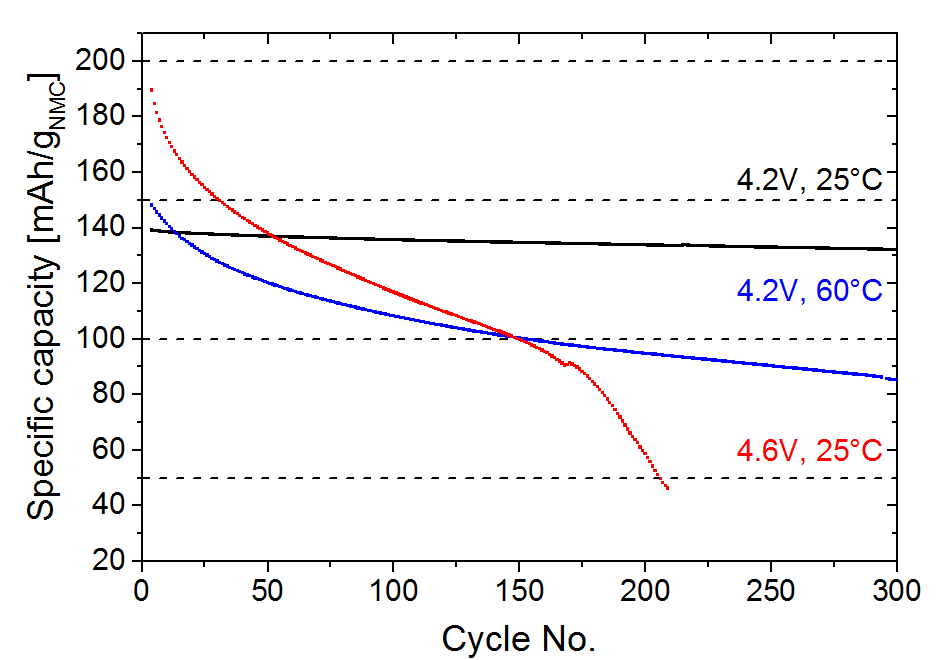 Lithium ion batteries are widely used in portable electronics and increasingly also in battery electric vehicles [1] or large scale energy storage systems. For batteries in vehicles or local energy storage, life times of >10 years are required. In this scope it is essential to identify, understand and quantify the mechanisms that lead to battery failure in order improve cell lifetime. The interplay of the methods XRD, PGAA and AC impedance and other EC methods in our recent investigation [2] allowed us to determine the main failure mechanisms of NMC/graphite cells. Here we will focus on the neutron methods part, especially the PGAA. 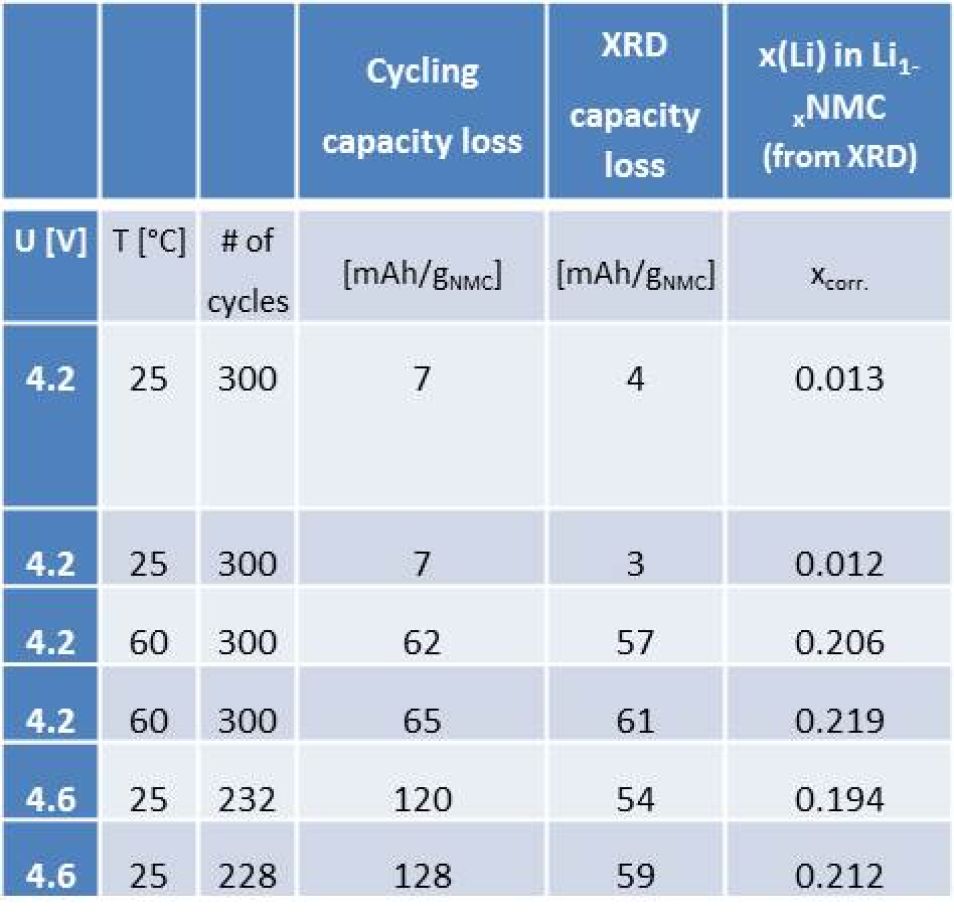 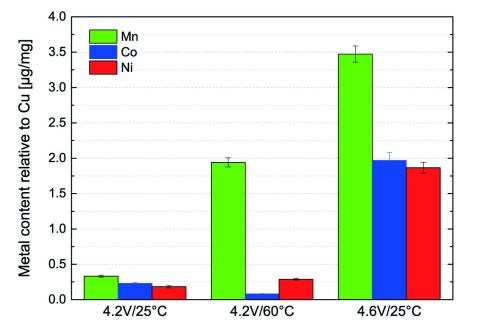 We investigate the EC aging behavior using Swagelok T-cells consisting of the active electrode materials graphite and NMC, separated by two glass fiber separators as a function of temperature and upper cut-off potential. For our aging studies we use two initial slow formation cycles at C/10 rate with 4.2 V upper (charge) and 3.0 V lower (discharge) cut-off potential. By definition C/10 corresponds to a current which charges or discharges the full cell within 10 h.

The formation process was followed by charging/discharging (cycling) the cells with 1C rate at the different conditions, the results are shown in Fig. 1. Combining in situ and ex situ XRD it is possible to establish the remaining capacity (=amount of active lithium) of the aged cathode from the correlation of the lithium content in NMC with its lattice parameters (c, a) [2]. Similarly neutron diffraction can be applied and has been reported for other cell chemistries [3]. Two major observations are deduced by comparing the electrochemically obtained capacity losses to the capacity losses obtained from the structure of the aged cathodes (see Tab. 1):

There is a clear trend of increasing transition metal deposition at elevated temperatures (60 °C) and especially at higher cut-off voltages (4.6 V). There is also a preference to the dissolution and deposition of Mn-ions. In the case of high temperature long-term cycling (4.2 V/ 60 °C) the amount of deposited Mn is nearly an order of magnitude larger than the amount of Ni/Co. On the other hand at high cut-off potential (4.6 V/ 25 °C) all transition metals are significantly transported, but the amount of Mn is still roughly double the amount of Ni/Co. Similar preferential dissolution behavior has been observed by Gallus [4].

Generally, two mechanisms for the transition metal dissolution are suggested. In the lower voltage region, disproportionation reactions are supposed to be the main reason [2]: 2Mn3+ → Mn4+ + Mn2+.
Here trace amounts of Mn3+ in the NMC lattice are created due to defects or oxygen vacancies and trigger the dissolution reaction. At higher potentials (like 4.6 V) computational studies showed that the hybridization of electron orbitals between oxygen and transition metals is changing, leading to a reduced effective oxidation state of the metal atoms, causing their dissolution into electrolyte (perhaps also accompanied by oxygen release from the structure) [6]. Mn-dissolution triggered by either of these mechanisms is furthermore enhanced by HF, instantly generated from the decomposition of the LiPF6 salt and traces of H2O as shown by Metzger [7].

By combination of our PGAA results with XRD, AC impedance and other EC methods [2] we conclude that the enhanced capacity loss at elevated temperature (4.2 V/60 °C) is most likely caused by an excessive growth of the anodic solid electrolyte interface (SEI) and thereby consuming active lithium. This is triggered by the transition metal dissolution and deposition. Generally SEI growth is vastly accelerated as a result of increased electronic conductivity of the SEI-layer due to the additional precipitation of transition metals into it. Finally, in the case of higher cut-off voltage (4.6 V/25 °C) we show that capacity degradation is caused not only due to active lithium loss but also by a significant impedance growth, cell polarization and possibly particle inactivation.