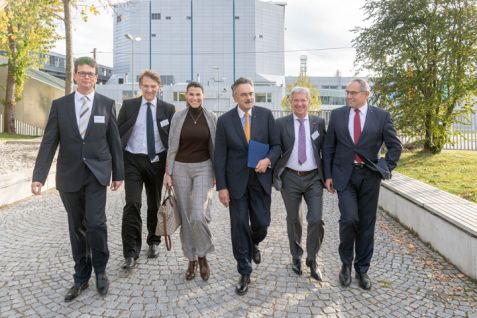 Winfried Petry’s merits were highly appreciated by the President of TUM, the Bavarian Minister of Science and the Arts, a representative of the Federal Ministry for Education and Research and by a board member of the Forschungszentrum Jülich.

The former Bavarian State Minister of Science and the Arts, Professor Dr. med. Marion Kiechle, mentioned that the huge number of guests(400) are evidence of the honour and appreciation for Winfried Petry given by special guests, former and current collaborators, colleagues and fellow scientists. The minister praised his extraordinary dedication to the Neutron-Source in Garching, which has been strongly influenced by his personality. “You have successfully dealt with a topic that is still decisive today: Communicating science” Prof. Kiechle said and she pointed out that the Bavarian State Government fully endorses cutting edge research. She promised that her ministry would stay a reliable partner in the future and she mentioned, addressing the new Scientific Director Prof. Dr. Peter Müller-Buschbaum that the scientific performance of FRM II and MLZ are in his hands now.

Professor Dr. Wolfgang A. Herrmann highly appreciated that Professor Petry always stuck to his principles and opinions. The former Scientific Director of FRM II was an outstanding science manager, who convinced everyone. However, Professor Herrmann also made clear – with a twinkling eye – that by appointing him Emeritus of Excellence he would like him to continue serving his university. 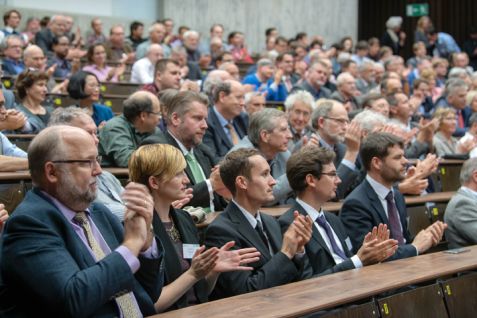 The representative of the Federal Ministry for Education and Research, Dr. Michael Stötzel, wanted to find out the motivation of Winfried Petr, and his conclusion was that he was able to bring people together despite organizational and bureaucratic barriers. With regard to the way Winfried Petry moves, Mr. Stötzel said “One always knew where the top is; it’s where Mr. Petry is running”. The “master piece” of the 67-year old scientist was the cooperation between the Helmholtz centres of Jülich, Geesthacht and Berlin, and the Technical University of Munich (TUM) established in 2011 with the subsequent foundation of the Heinz Maier-Leibnitz Zentrum in 2013. Thus, Winfried Petry contributed to shaping the German research with neutrons/German landscape of research with neutrons. To the Federal Ministry for Education and Research, the cooperation with neutron scientists in Germany is very important, and therefore Garching became an internationally attractive and clearly visible place.

Prof. Dr. Sebastian Schmidt emphasized the inalienability of the MLZ for research with neutrons in Europe. Europa will encounter a lack of neutrons, since some sources are going to be shut down. However, the FRM II is a reliable source getting a more and more European dimension, the Board member of the Forschungszentrum Jülich said. In his welcome speech he also mentioned that the number of beam-time proposals is continuously increasing: The MLZ is a national source that is progressively becoming a European source.

The welcome speeches were followed by two scientific talks: Professor Dr. Andreas Meyer took the guests on a journey from the origin of Winfried Petry’s research on diffusion passing by critical power laws of the solidification of supercooled liquids to the research rockets of his institute at the German Aerospace Centre. Rockets operating under the ideal conditions of zero gravity investigate this phenomenon more thoroughly.

By displaying the highlights of the recent research with neutrons, Professor Dr. Helmut Schober, Director of the Institute Laue Langevin, Grenoble, illustrated its significance for and contribution to solving issues of the modern industrial society. In order to characterize Winfried Petry’s personality, Helmut Schober needed four dimensions: his knowledge, which combines both depth and breadth, his endurance and finally his straightness and empathy.

Deeply touched by the huge recognition he received, Winfried Petry expressed his thanks to his alma mater and in particular to its president for the support and the freedom he experienced. “I enjoyed taking over responsibility and building up something new” he said, “this, however, would not have been possible without the trustful cooperation with the Bavarian State Government”.

A farewell party amid a joyful atmosphere followed the scientific colloquium.