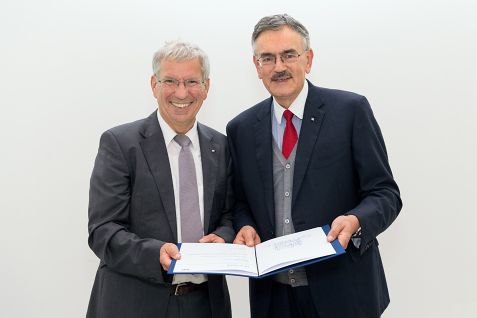 Prof. i.R. Dr. Winfried Petry has been awarded with the honorary title of Emeritus of Excellence of the Technical University of Munich (TUM). TUM-President Prof. Dr. Dr. h.c. mult. Wolfgang A. Herrmann bestowed the certificate appreciating his academic achievements on 9 October.

Winfried Petry received the honorary title recognizing his lifework during the TUM-Emeriti of Excellence general meeting at the Vorhoelzer Forum of TUM. The 67-year-old already received the Bundesverdienstkreuz am Bande (2008), the Honorary professorship of the Chinese Atomic Energy Agency (2006) and he is Honorary Member of the Kerntechnische Gesellschaft in Germany (2018). In 1992, Petry was appointed professor for experimental physics at the Physics Department of TUM, he served as its dean and was a member of the TUM-senate. Until his retirement in March 2017 Winfried Petry has been Scientific Director at the research neutron source Heinz Maier-Leibnitz (FRM II) for 17 years and since 2011 Director at the Heinz Maier-Leibnitz Zentrum. 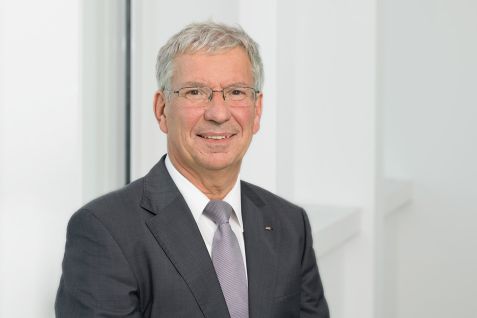 Winfried Petry is Emeritus of Excellence of the Technical University of Munich. © Uli Benz / TUM

Winfried Petry will continue his engagement at TUM, FRM II and MLZ, also in the context of his new honorary office. He supervises his PhD students intensively, advises the new Scientific Director of the FRM II, Prof. Dr. Peter Müller-Buschbaum, and gets involved with the public relations work of the FRM II.

Public talk:
As Emeritus of Excellence, Winfried Petry will give a talk in the TUM Tech-Histories Alive series in the Vorhoelzer Forum, Munich, on 29 January 2019, at 18.30 h.

Information about the honorary title:
Since 2006, the Technical University of Munich (TUM) has been bestowing the honorary title of “TUM Emeriti of Excellence” on selected retired professors for their outstanding achievements and distinguished service to TUM. The advice of these retired academics is valued particularly highly because of their personal autonomy, vast experience and outstanding reputation in the scientific community. They also underpin TUM’s diversity strategy – adding value by valuing all age groups as transition to a more intergenerational university.