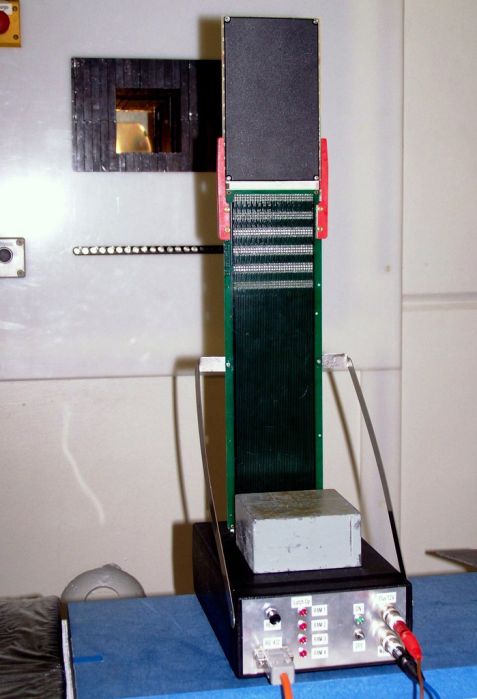 The various ranges of neutron energies available at the SR10 beamline find their main application in the characterization of materials and the testing of complete electronic devices. Both fast and thermal neutrons are accessible at the SR10 beam line, the irradiation facility MEDAPP and the instrument NECTAR. The flux density at the various irradiation positions is for fast neutrons at MEDAPP about 3.2 × 108 cm-2s-1, and for thermal neutrons approximately 2 × 109 cm-2s-1. In the finely collimated and strongly lead-filtered beam of NECTAR, the flux density is approximately 2 orders of magnitude lower.

At MEDAPP, fast neutrons are used in the qualification of radiation detectors and the testing of the radiation resistance of electronic components. This is of major importance in components for use in radiotherapy with protons as well as in large accelerators, such as CERN or in satellite technology, where susceptibility to breakdowns and the service life of electronic circuits in intense radiation fields must be evaluated and optimized in advance.

At the end of the SR10 beam is the instrument known as NECTAR. This offers neutron radiography and tomography using fast and thermal neutrons. Fission neutrons penetrate dense materials more easily than X-rays whereas hydrogen interacts with neutrons much stronger than with X-rays. Therefore, organic material can be made visible even if contained in a metal case., for example oil in an engine. Also, the analysis of considerably bulkier objects is made possible with fast neutrons as opposed to thermal ones, but without the higher resolution obtainable from the latter.