More than 500 visitors at the open day in Garching 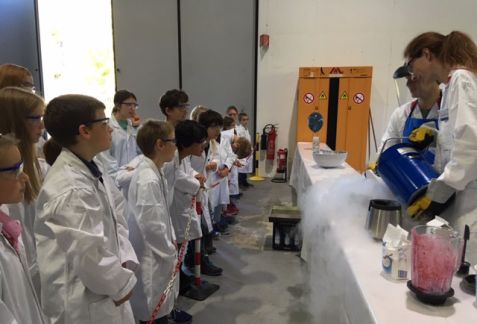 51 children were allowed for the first time to participate in a special kids-tour. The highlight was in the end of the tour: home-made ice cream by using liquid nitrogen. © FRM II / TUM

One sixth of the annual visitors don’t come on one day for no reason. Like every year the neutron research source had quite a lot to offer.

Most of the visitors came to participate in one of the desirable guided tours. 488 of them had the chance to inspect the reactor hall, neutron guide hall and the experimental hall. The strict rules allow only visitors older than 18 years to enter those parts of the facility. But younger guests and those who were not able to get a place in the tour could comfort themselves with a wooden reconstruction of the famous Atomic-Egg. This art project from a group of architecture students is part of the open day exhibition since the 60th birthday of the Atomic Egg. For the little ones no comfort was necessary. 40 children between 9 and 13 years were allowed for the first time to participate in a special tour designed for them. During its two hours last they learned about the structure of the atoms, the neutrons and their usage in this research facility. It ended with the making and enjoying of ice cream by using liquid nitrogen. 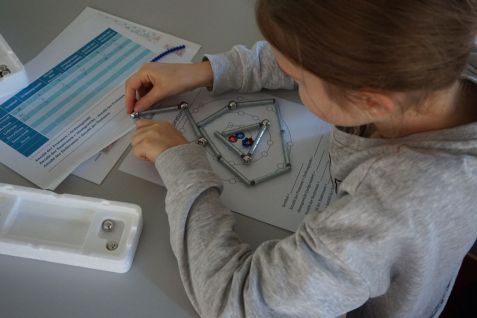 During the kids-tour the young visitors were able to construct chemical elements in a handicrafts-session. © FRM II / TUM

Besides the wooden Atomic-Egg a hand full of other attractions were waiting for the visitors at the physics department. Some measurement devices could be examined and employees of the MLZ answered every question concerning those devices and more general ones. The guests had interesting conversations with the staff and made them tell various stories for example about natural radioactivity. Most of them knew about its natural occurrence, but nevertheless were they surprised to hear about the usage of radioactive material in the past. It sounds ridiculous for us today, but not that long ago there were tiles manufactured with Uranium and clocks painted with Radium to shine in the dark. 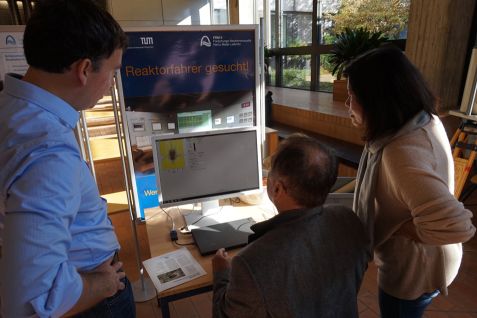 To work at the neutron source, one has to be sufficiently protected. The protective suit for construction work in the pool was inflated and displayed for all visitors. Especially motivated ones could test their abilities as reactor drivers in a little simulation. There was also the possibility for young visitors to simulate how hard it is to hit atoms with neutrons. Small tennis like balls were positioned on a wall and represented the nuclei of a solid crystal structure. The contestants would throw a ball, representing the neutron, on the wall and try to hit the nuclei. For multiple successful collisions they were rewarded a t-shirt.

For those, who were interested in how the research is actually conducted, the MLZ offered a few small lectures. The topics included the usage of neutrons in archeology and biology but also the neutrons in general and how they are generated and delivered to the experiments.