Detector System for Snapshots of Biological and Chemical Processes 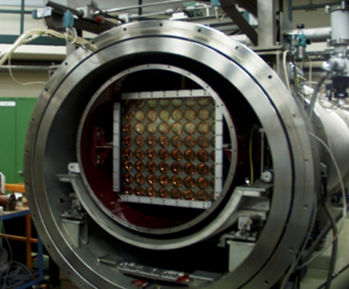 Forschungszentrum Jülich, together with its project partners in science and industry from France, Norway and Sweden, is to receive around four million Euros from Horizon 2020, the framework programme of the European Union for Research and Innovation, for the development of a more powerful detector system for use in neutron research. The aim of the SoNDe-Project is to develop a prototype for a new generation of detectors, which will be necessary for optimal scientific use of modern neutron sources. The detector should be able to identify around twenty times more neutrons per second with a highly improved local resolution and thus enable snapshots of biological and chemical processes to be taken for the first time. Additionally, this technology offers a range of other advantages and is also suitable for use in applications outside the area of neutron research.

Neutrons are electrically-neutral building blocks of the nucleus of an atom. They are produced in specialized research facilities, and with the help of so-called scattering instruments are directed at the sample to be investigated. The neutrons “bounce off” the samples’ atomic nuclei and may in the process alter their direction and speed. This type of “scattering gives information about the positioning and movement of the atoms in the sample that remains hidden to complementary methods such as X-ray or electron microscopy. Detectors transform the scattered neutrons into electronic signals using a multi-step process. This complicated process is necessary, as neutrons are invisible to the human eye and do not carry an electric charge.

The so-called count rate of detectors – the number of neutrons identified per second – is currently limited to the low single digit megahertz range. This places restrictions not just on the performance of experiments at modern neutron sources, but also to an even greater degree at future neutron sources with a high neutron flux. When too many neutrons in rapid succession hit detectors which are too weak to cope, measurements are rendered impossible. For this reason, over the next four years researchers and engineers at the Jülich Centre for Neutron Science (JCNS) and the Jülich Central Institute for Engineering, Electronics and Analytics – Electronic Systems (ZEA-2) plan to develop new detector technology which, along with other advantages, offers a count rate approximately twenty times better. They will work together with partners at the neutron research centres Laboratoire Léon-Brillouin (LLB) in France, the European Spallation Source (ESS) and Lund University in Sweden, along with the Norwegian company Integrated Detector Electronics AS (IDEAS). At the end of January, the European Commission agreed to support this project, which will be coordinated by Forschungszentrum Jülich, with a grant of around four million Euros.

The detectors still contain so-called scintillation material as before, which emits a weak flash of light when a neutron comes into contact with it, hence the project acronym, Solid-State Neutron Detector. At the heart of the new technology are multi-anode photomultipliers, which replace the photomultipliers used up until now. Photomultipliers strengthen the light signal and transform it into an electrical signal. Conventional photomultipliers have a diameter of around ten centimetres, but in future, this will be reduced to around five millimetres. In this way, it is possible to accommodate around a hundred times more sensors on each surface, which improves the count rate and the resolution of the detectors.

“The aim of the project is to develop a prototype whose outstanding performance will later be shown at the European Spallation Source, currently still under construction”, explained Dr. Sebastian Jaksch, Project Coordinator at the JCNS. From 2019, the ESS should be able to produce about 30 times the number of neutrons compared to the output of current facilities. For this reason, the very short neutron flashes are long enough to collect data, which means that smaller sample sizes and more rapid processes can be investigated. Similar to a stroboscopic lamp, it is possible to record snapshots of tiny movements and put these together in a video, to show for example the aggregation of organic molecules or chemical reactions.

The detector will be using a modular construction, which has two significant advantages: first, it allows the technology to be easily adjusted to fit the requirements of different experiments, where, depending on the objective, detector surfaces can vary greatly from a few square centimeters to several square metres. In addition, defective surfaces can be replaced within a matter of days whereas repairs to conventional detectors can take up to several months to complete. A further advantage to this technology is that it can function without the expense of using helium-3. This rare gas is both difficult and expensive to obtain, and is used increasingly for other purposes. As scintillation detectors are in principle suitable for use in a wide range of applications, such as imaging methods in medicine and engineering, the project is also keen to explore these avenues.