As with materials in the solid state, the phase diagrams of vortex matter in type-II superconductors exhibit crystalline, amorphous, liquid and spatially inhomogeneous phases. The multitude of different phases of vortex matter has therefore been shown to act as an almost ideal model system for the study of both the underlying properties of superconductivity and of general phenomena such as domain nucleation and morphology. We have recently demonstrated how neutron grating interferometry combined with small-angle neutron scattering yields detailed information on the vortex lattice and its domain structure in the intermediate mixed state of a type-II niobium superconductor.

Domain structures exhibiting striking similarities can be found in physical, biological and chemical systems with varying length scales, being abundant on the micrometer scale. While the interactions driving the domain formation are different, the resulting morphologies are surprisingly similar. In particular, generic structures such as bubble, stripe or dendritic domains are commonly observed. Representative of this multitude, the type-II superconductor niobium in its intermediate mixed state (IMS) has recently been identified as an ideal model system for studying the process of domain nucleation. The IMS structure composed of field free Meissner and Shubnikov domains which carry a vortex lattice can be conveniently tuned by a variation of temperature and external magnetic field. Hence, the IMS allows one to study the development of long range order paired with domain nucleation at a mesoscopic scale. 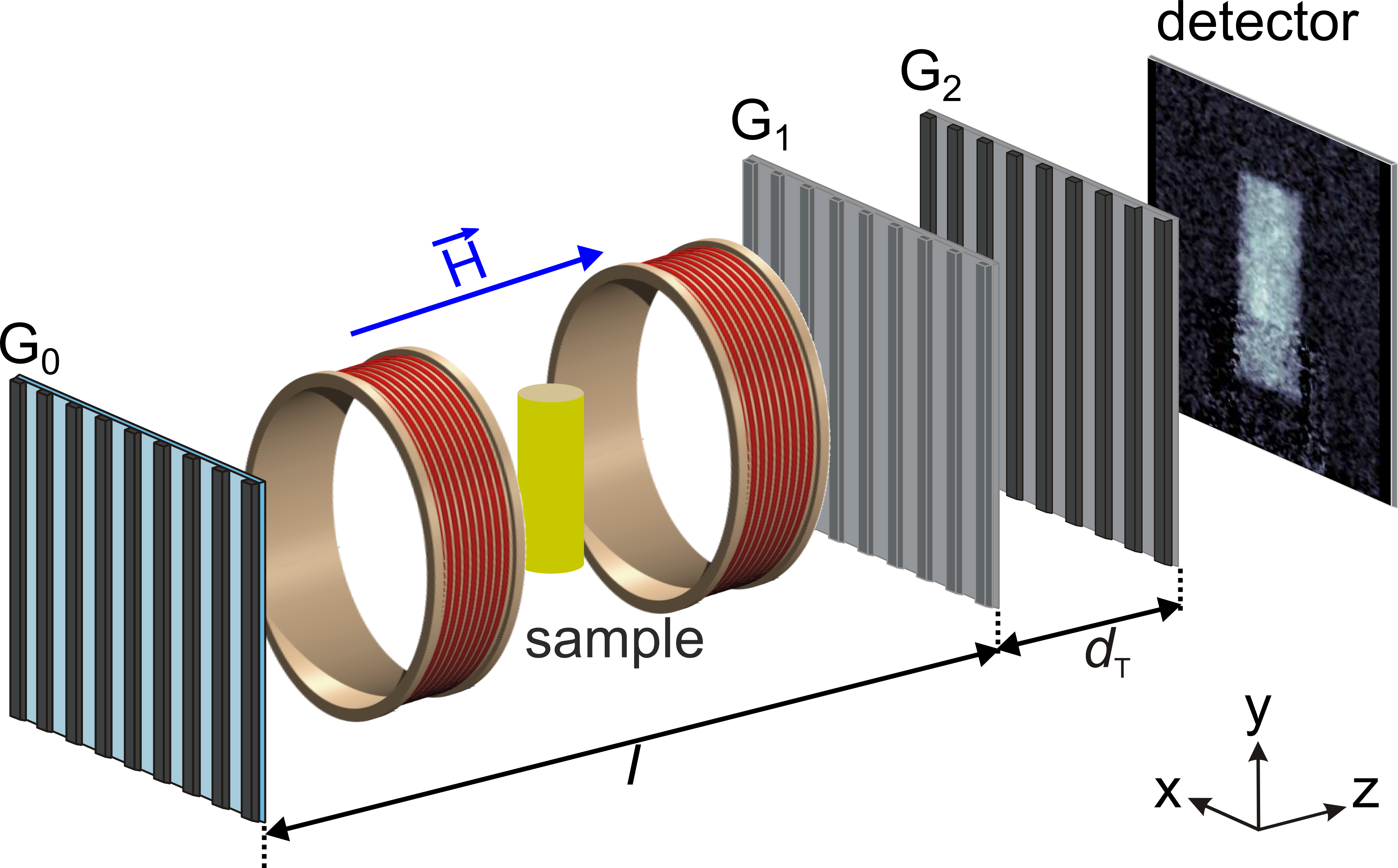 Figure 1: Illustration of the nGI setup for the IMS investigation. nGI is based on two neutron absorption gratings (G[~0~] and G[~2~]) and one phase grating (G1) implemented into a neutron imaging beamline.

However, until now the morphology of the superconducting vortex lattice (VL) in real space has only been observable by means of surface sensitive techniques which suffer from the effects of surface pinning due to structural inhomogeneities, or from geometrical constrains. We have recently shown that neutron grating interferometry (nGI) (Fig. 1) combined with small angle neutron scattering (SANS) yields detailed information on the morphology of the VL and its domain structure in bulk superconductors covering length scales from 20 nm up to 10 µm [1].

nGI is an advanced technique in neutron radiography where regions involving the scattering of neutrons under ultra-small angles (USANS) are identified [2]. Hence, signatures in reciprocal space leading to the scattering of neutrons are used to generate contrast in direct space. By applying the nGI-method to the archetypical type-II superconductor niobium, we examined the structure of the intermediate mixed state. Using nGI, we were able to identify in particular that: i) the IMS nucleation takes place in the center of the sample ii) it expands to the edge of the sample in increasing field and iii) as the IMS finally evolves into the Shubnikov phase, the transition is delayed at the sample edges (compare Fig. 2).

Figure 2: Dark-field images (DFI) results of an ultra-pure niobium rod as a function of increasing magnetic field after ZFC to T = 4 K. The contour of the sample is indicated by the dashed boxes. The results for B > 0 are normalized with those for µ0 H = 0 mT, hence only the pure magnetic contribution from the VL is visualized. White contrast marks the IMS regions, hence the DFI provides information about the VL domain formation in the IMS phase. 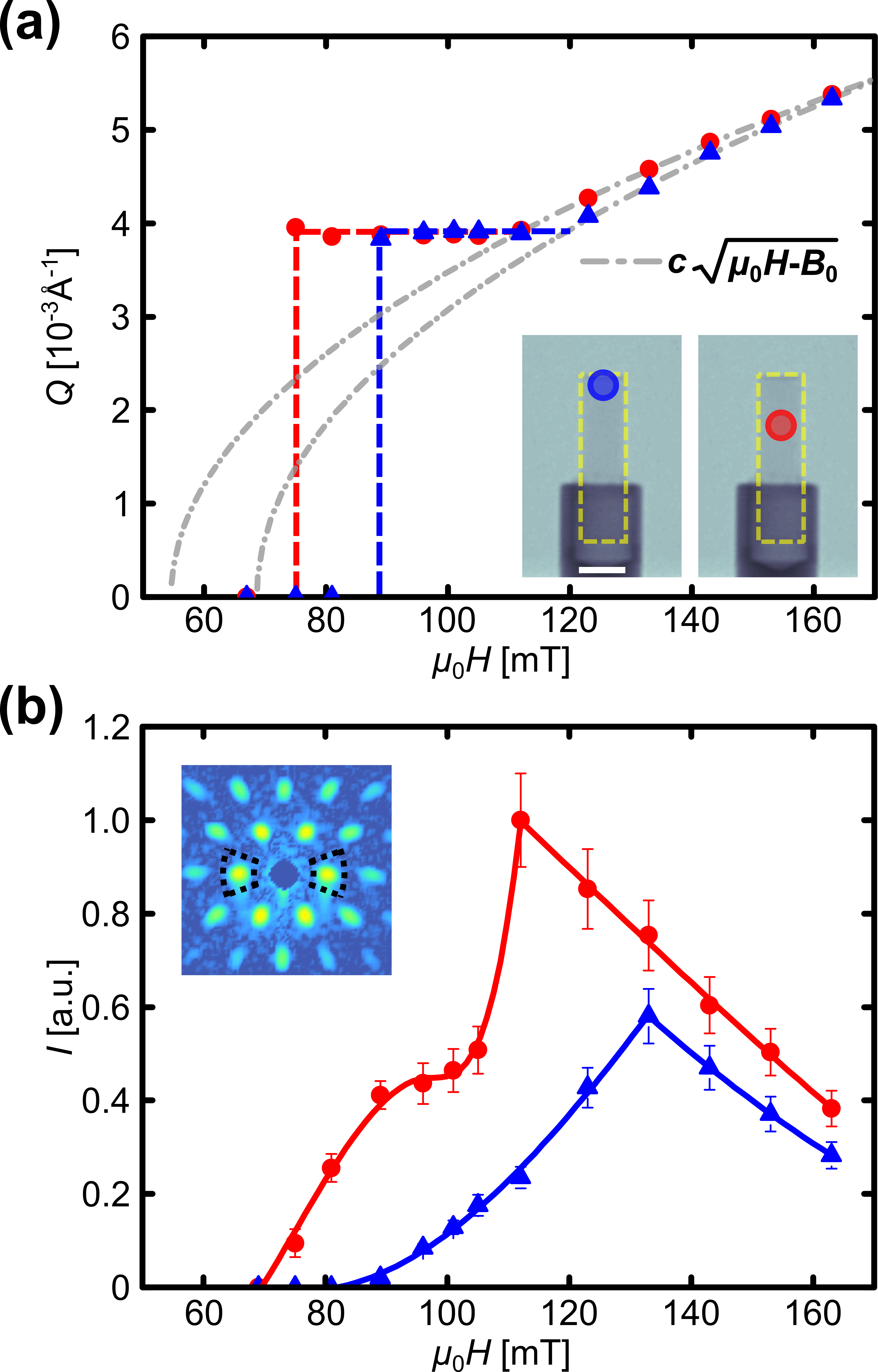 Figure 3: Quantitative analysis of the SANS data from the Nb rod for the two measurement positions indicated in the inset of (a). (a) Q-position of the first order Bragg peak of the VL as a function of the applied magnetic field. The measured positions of the peaks are shown in the inset of (b). (b) Integrated intensity of the first order Bragg peak versus magnetic field. Clearly, the appearance of VL is delayed on the sample edge.

We complemented the nGI results obtained using SANS. This method is well suited for the investigation of vortex matter as it probes the typical vortex lattice parameter of a few 100 nm. Furthermore, the IMS phase can easily be identified by the field independent vortex spacing. The experiments confirmed the spatially resolved morphology found in the IMS phase and provided information on the structure of the vortices within the domains (Fig. 3). In agreement with the nGI results, SANS shows that the onset of the VL, as well as its transition from the IMS to the Shubnikov phase, is delayed at the sample edge. Moreover, by means of SANS it was possible to quantify the effect of field degradation at the sample edges at 14 mT.

Besides providing detailed information on the IMS domain nucleation in bulk niobium, our study, by combining neutron techniques in direct and reciprocal space, serves as a show case for a powerful procedure to investigate the domain formation in a multitude of systems in hard and soft condensed matter over a huge range of length-scales extending from the Å to the tens of micrometer scale.