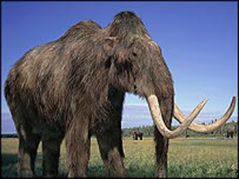 Some 12,900 years ago, the earth’s climate cooled significantly within just a decade, which very likely led, among other things, to the extinction of the mammoths. The cause of this is thought to be a powerful meteorite impact, which covered Europe and America with a thin layer of rock. Neutron research has now thrown up clues about the origin of the cosmic chunks: the composition of the rock stratum shows an amazing similarity to moon rock.

Some 12,900 years ago, mammoths and other large animals became extinct and the prehistoric Paleo-Indian Clovis culture disappeared from the Americas. At the same time, the Laurentide Ice Sheet in Canada suddenly failed and affected the North Atlantic currents, leading to a 1300 year return of ice age conditions known as the Younger Dryas (YD), named after a flower which was common to the icy tundra climate. Simultaneously, a thin sediment layer was deposited across the Americas and Europe containing magnetic grains, microspherules enriched in iridium, carbon spherules, nanodiamonds, and a host of other markers consistent with a massive extraterrestrial impact. According to a new hypothesis, this impact was directly responsible for extinctions and changes in climate that occurred at that time.

A neutron technique called Prompt Gamma Activation Analysis (PGAA) proved to be an important tool for determining the meteorite’s composition and samples from where it impacted Earth. PGAA utilizes the absorption of neutrons by atomic nuclei followed by the emission of characteristic gamma radiation. PGAA is non-destructive and provides a unique opportunity for the analysis of light elements, especially hydrogen and boron, which is difficult to analyse using routine instrumental analytical techniques. The method is also very sensitive for rare-earth elements. A set of archaeological samples, soils and meteoritic particles, originating from different excavation sites in the USA, have been analysed using the PGAA instrument at the Heinz Maier-Leibnitz Zentrum.

Analysis of the YD impact layer (Fig. 1) shows remarkable similarity to the lunar terrain visited by the Apollo astronauts. It is characterized by the presence of a magmatic rock called KREEP, which contains Potassium (K), Rare Earth Elements, and Phosphorus. High water content in the magnetic grains determined by PGAA suggests they were formed in wet conditions consistent with a scenario involving forcible contact with the Laurentide Ice Sheet. The distribution of the impact material and the orientation of the Carolina Bays, suspected impact structures on the East Coast of the US, are also consistent with an impact near the Great Lakes. Searches for more YD impact evidence have led to the discovery of other impact events (Fig. 2).