The Long Night of Science – too short anyway 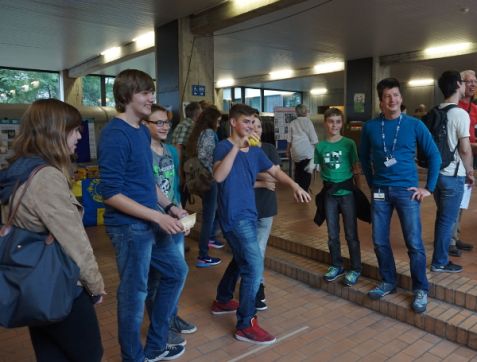 The Long Night of Sciences on 27 June 2015 provided everyone with games, fun and excitement.

This year 373 visitors landed a place in one of the coveted guided tours. All tours offered were already booked up at 7 pm. Many interested visitors therefore had to be rejected, however, appointed with a business card of the visitor service, which gives them the opportunity to come separately later.
The Radiation Protection Unit informed this year not only on the safety measures of the FRM II at its booth, but gave the visitors the chance to virtually try as reactor operator. A reactor operator controls the entire system of a nuclear facility; with a little computer game visitors could experience how the reactor power changes with the position of the so-called control rod.

The operation principle of the instruments TOFTOF and TRISP could be explained by the two Lego models, as always an eye-catcher at the booth of the MLZ. The visitors were also delighted by the throwing game, in which they should hit four atoms in a crystal lattice with five neutrons. Who managed this, won a T-Shirt. Just like in real (scientists) lives not all tests were successful, but it always was sufficient for a small consolation prize.
An Open Day apparently enjoys great popularity even if it is a warm night in June. Despite a large number of competitive events in Garching and Munich and a short shower around 9 pm this year again about 11 000 visitors moved to the campus.
Those who missed this night will have to wait a long time to visit the exciting projects from research, because the next open day is only in October 2016.