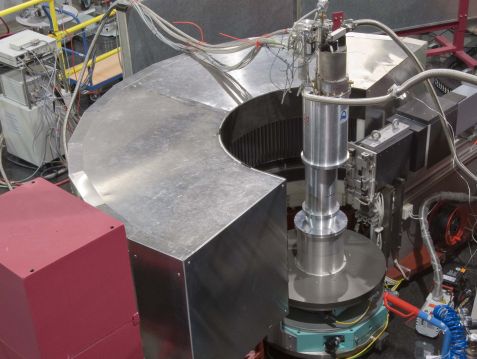 SPODI was the instrument which helps revealing the structure of Heusler alloys. © W. Schürmann / TUM

The journal Acta Materialia published the results of an experiment with the instrument SPODI at MLZ that allows developing a faster method for structure determination of shape memory alloys of nickel-manganese-indium. These alloys have become very interesting in recent years because of their special properties: they have a shape memory which can be changed by a magnetic field. This behavior is mainly based on the interaction of crystal structure and magnetic order and this implies, for which application the alloy suits.

The scientists combined high-resolution neutron diffraction at the instrument SPODI and diffraction with synchrotron radiation to investigate a Ni2Mn1.44In0.56 alloy. They thereby found a wave-like (modulated) super structure, in which the position of every sixth lattice element is identical. This superstructure is found, according to the researchers involved, in similar alloys of nickel, cobalt, manganese and indium, which martensitic change elapses near room temperature. The results contribute to a better understanding of the mechanism of this effect and to be able to better control the magnetic and mechanical properties of future alloys.

This experiment and the rapid publication is an impressive achievement for the so-called Rapid Access program at MLZ. Normally, scientists can apply twice a year for measuring time with neutrons. An expert panel evaluates these proposals, then the scientist gets the requested measurement time allotted, if the capacity is still available.
Since summer 2013, there is also a quick access through the newly launched Rapid Access program. These applications will only pass through an internal assessment and there are only 3 days per cycle. Users who require neutrons as an additional characterization method, have a maximum of 12 hours for their experiment; careful planning and preparation are therefore an important requirement to benefit on it. Users have very well received the Rapid Access program, with the possibility of rapid access to the MLZ infrastructure; the number of applications exceeds the capacity here by far. The offer is limited to the instruments SPODI, PGAA, KWS-2, and – brand new – also to BIODIFF.