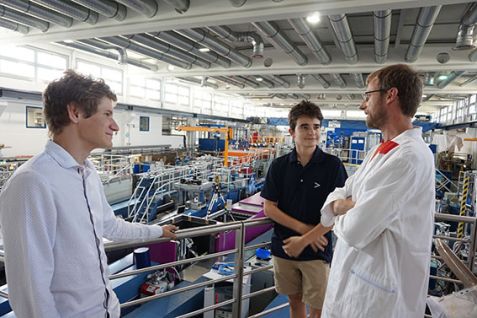 Instead of beach and sun, they preferred working with mathematical functions for neutron scattering data. Two pupils changed Catalonia for Bavaria for four weeks and performed a practical with Dr. Sebastian Busch at the MLZ in summer.

Good grades and knowledge in programming were the prerequisites to fulfill for the summer programme at the Heinz Maier-Leibnitz Zentrum. The two students, Jon Bárcena and Amadeu Carceller from the Aula school in Barcelona, were chosen by the Cellex foundation from several applicants to go to Garching in August.

Now, they are sitting in front of a screen, trying to make sense of the „sort of crazy looking neutron scattering data“, says Jon Bárcena. Their tutor, Dr. Sebastian Busch from the Helmholtz-Zentrum Geesthacht, has given them the data to fit them using artificial intelligence. „Neutron scattering is an expensive process“, explains Jon. „So there is not many data, which have to be fitted by a curve.“ Sebastian Busch looks satisfied: „They wrote the function for fitting the curve with machine learning techniques themselves. The accuracy of their function is even better than the algorithm we normally use to fit the curve!“

„It is fun working here“, Amadeu Carceller says. Before writing mathematical functions, the 16 and 17 year old students have got a tour of the neutron source. On the weekends of their stays, they have also visited the BMW museum in Munich and the concentration camp in Dachau. They both consider studying abroad, „maybe physics or informatics“.

The funding organisation behind the scholarship for the pupils is the Cellex foundation. Each year, it offers 24 pupils in Barcelona five international scientific institutions for their stay. The MLZ with the local contact Dr. Sebastian Busch is one of the destinations. The pupils have to qualify with good marks and skills, but can wish their destinations. There have been two generations of students before Amadeu Carceller and Jon Barcena who came from Barcelona to the MLZ in Garching. And there will be pupils again for another summer programme in 2019.