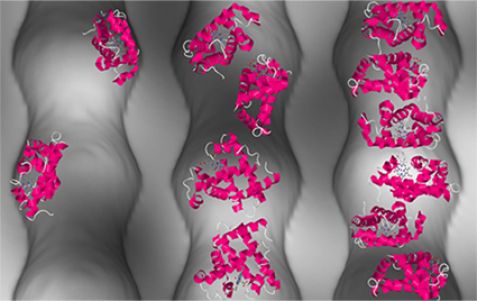 The image illustrates the arrangement of proteins (depicted in pink) in nanopores at various concentrations. © Forschungszentrum Jülich

Small angle neutron scattering at KWS-1 has enabled scientists of Forschungszentrum Jülich and the University College London to look at the arrangement of proteins inside nanocavities. They showed for the first time, that the molecules do not clump despite limited space and even found the reasons for this behaviour.

Protein molecules are nature’s all-rounders and carry out their specific tasks with great efficiency. For example, some play an important role in converting substances; others are involved in combatting pathogens. As a result, these biological machines are important in technical as well as medical applications. However, proteins tend to clump together irreversibly at high concentrations and thus lose their effectiveness, although this only occurs when they are outside their natural environment of the cell’s interior.

Spatial restrictions can maintain the activities of concentrated protein solutions. Just why this happens has until now been poorly understood. Scientists at Forschungszentrum Jülich and University College London have now demonstrated for the first time that despite high concentration levels, proteins do not clump together in nanocavities of porous silicon dioxide, but instead behave like a fluid. The scientists discovered that crucial to this behaviour are on the one hand the interactions between the proteins and the interface, and on the other, the curvature of the nanopores.

Small-angle neutron scattering at the instrument KWS-1 with Dr. Artem Feoktystov at the Heinz Maier-Leibnitz Zentrum has enabled the researchers to directly identify the arrangement of the proteins tested, myoglobin and lysozyme, through the nanostructured materials. In doing so, the researchers showed that the method enables connections between the characteristics of the pores, the arrangement of the proteins and their activity to be revealed. The knowledge gained can be used for the development of new and better bioinspired applications in biotechnology, medicine and catalytic processes.