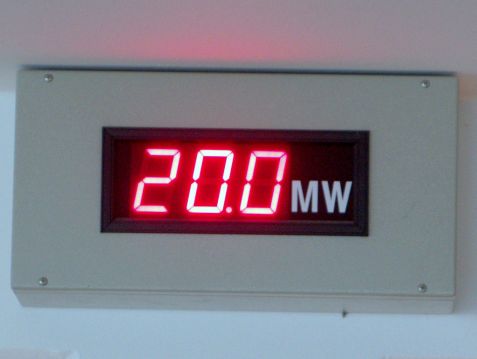 Since today the FRM II provides users and customers from science, industry and medicine after a thorough review again neutrons and irradiation services.

After 10 years of operation the FRM II was since February 9, 2014 in a planned major maintenance break. The main objective of this maintenance break was the mandatory extensive in-service inspections, among other things, e.g. pressure and visual inspections on the central channel, all beam lines and the moderator tank. In addition to these large 10-annual tests a wide range of tests was carried out and the rest was used for extensive maintenance, such as overhauling the shutdown rods and the extensive reconstruction of the cooling tower cells.

Checks that are performed for the first time after 10 years of operation and e.g. include the internal inspection of usually inaccessible areas, can certainly lead to findings that require further time-consuming measures. In our case, the tests were completed without such variations and also the proof of the suitability of the material close to the core components for the next years of operation has been performed.
The operating license also explicitly needs to take care, that the results of the associated periodic inspections shall be submitted to the supervisory authority and the expert and the operation of the plant after the tests is under conditional approval by the Bavarian State Ministry of the Environment and Consumer Protection. This approval is present, dated by August 14,2014.

As published already in late summer 2013 in a rough outline plan for the year 2014, we have estimated a period of about six months for the long maintenance interval and scheduled as a target date for the restart on the 19th of August. After all open containers and systems were closed, emptied the moderator tank for the tests and filled with light water again, dried and filled with heavy water, we could gradually put all systems into operation again last week are. On Friday, August 15, the new fuel assembly for the 35th cycle was inserted.

In the course of yesterday afternoon, the necessary checks for the safety shut-down were carried out and the reactor was started. With the usual performance stages, the reactor power was then gradually increased; the rated power of 20 MW was reached shortly before midnight.

In many places the schedule was narrow and ambitious but could be maintained at the end despite some delay and shift within the maintenance break. This is especially dedicated to the operating team, who – despite holiday and vacation time – was prepared with great flexibility in the final stages of the maintenance interval to achieve the common goal on schedule.

Even if the reactor is now back in operation, many remains to be done: the documentation of the various measures of maintenance break has to be completed, many more already ongoing or planned for the coming months projects require the reactor operation team, which ensures the safe operation of the plant with top priority.