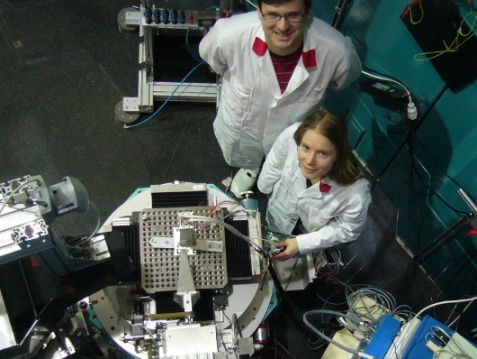 Veronika Zinth and Stefan Seidlmayer during the experiment with the sodium metal halide battery on the instrument Stress-Spec. © M. Hofmann/TUM

Worldwide, battery research is one of the most intensively studied research fields, because – for various reasons – the need for energy storage devices is growing rapidly. Also at the MLZ, several research groups work in this field and try to gain a better understanding of how batteries work by various neutron methods. These two new publications have recently been published:

Veronika Zinth and her colleagues have studied so called ZEBRA batteries (sodium metal halide batteries) during charge and discharge in order to understand the processes that take place inside the cathode in more detail. Since the examined type of battery uses two different elements, iron and nickel, that take part in the electrochemical processes and also has a cathode with several cm in diameter, it was not yet clear what reactions take place when at which locations. To adress this issue, the scientists used the spatially resolved neutron diffraction instrument STRESS-SPEC and were for the first time able to create a time and space resolved “map” of the various reactions. Veronika Zinth explains the result: “With neutron diffraction it was possible to examine each reaction and their relationship between each other inside the cell at the same time. The study is a good basis for future improvements in the composition of the cathode to increase the energy density of such a battery.”

Charge and discharge of a lithium cell at both electrodes proceed continuously over a number of intermediate stages with different compositions. Here, lithium is incorporated in the respective materials at the cathode and anode. The instrument SANS-1 at the MLZ served Stefan Seidlmayer to watch this lithiation process in a conventional lithium battery on a nanoscale. Together with measurements of single components and the determination of the scattering length density the small-angle neutron scattering offers the possibility to follow the reaction progress via the various lithium intermediates during the charging and discharging. In these first experiments, the time resolution was 10 minutes, Seidlmayer and his colleagues are now working to make faster measurements in one to two minutes. Stefan Seidlmayer explains the reason for improving the time resolution: “We would then be able to investigate the kinetics of lithium deposition in more detail, which could contribute significantly to prolong the lifetime of lithium batteries.”