Neutrons help understand the cause of amyloidosis – a rare but, so far, incurable disease 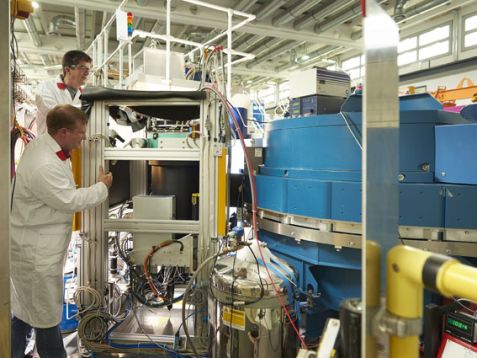 Dr. Andreas Ostermann (above) carried out the experiment with the stable T119M mutant at the instrument BioDiff. Here he can be seen with the instrument scientist Dr. Tobias Schrader. © W. Schürmann / TUM

New research published in Nature Communications may help scientists understand the cause of the rare and incurable disease transthyretin amyloidosis. A team of scientists based at Keele University (UK) and the Institute Laue-Langevin (France) has been trying to understand the mechanism by which the disease is caused. Neutron crystallographic measurements were carried out using both the ILL LADI-III diffractometer (operated by Matthew Blakeley) and MLZ’s neutron diffraction instrument BIODIFF with the help of MLZ scientist Andreas Ostermann. The neutron structures were important in visualizing specific details of molecular structure and drug interactions.

Amyloidosis is a rare and serious progressive condition where an abnormally folded hormone transporter protein builds up as amyloid fibrils in the organs and tissues in the body – leading them to not function properly or even fail. The disease is caused by a miss-folded human blood protein TTR (transthyretin), of which there are many types, so-called mutations. Many of these mutations are unstable, unfolding easily and eventually leading to amyloid clumps that deposit around the body.

Figure a and b: The packing of the C-D loop in transthyretin is the same for the T119M mutant and the native TTR form. However, the same loop at the mutation site of the S52P mutant (associated with the most aggressive form of transthyretin amyloidosis) is loosened, promoting misfolding of the TTR monomers into damaging amyloid fibrillary deposits.

The research team compared the structures and stabilities of normal TTR and two TTR mutants, T119M and S52P, using mass spectrometry, computer simulations, X-ray and neutron crystallography methods to try to solve the mystery of how and why amyloid fibrils form. S52P causes a very aggressive form of the disease while T119M offers strongly protective effects. Comparing their molecular structures provided some important clues to the mechanisms involved.

The BIODIFF monochromatic single crystal diffractometer at MLZ, a joint project of TUM and JCNS, is dedicated to structure determination of biological macromolecules, and was used to determine the structure of the highly stable T119M mutant. Light atoms, like hydrogen, present in this large biological molecule were clearly visible and their arrangement revealed the hydrogen bonding pattern in the molecule, particularly in a part called the CD loop that is most prone to unfolding. 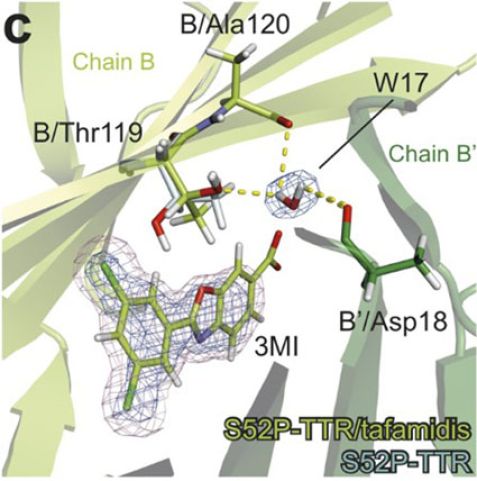 Figure c: The binding of the drug tafamidis to the transthyretin molecule, showing how the drug mimics the effects of the protective T119M mutant.

Transthyretin has a complex hierarchical structure of four subunits (monomers). The results from T119M revealed that this mutation stabilizes the dimer-dimer interface and therefore the tetrameric form. In contrast, the S52P form appears to have a looser and more destabilized CD loop in the monomer because an important hydrogen bond does not form. Consequently, the dimer and tetramer structures were also destabilized. It is believed that dissociation of the tetramer structure of the TTR molecule is the rate-limiting step in amyloid fibril formation.

There is currently no cure for TTR amyloidosis. At present, treatments include the drastic option of liver transplantation (not always successful) and a variety of candidate drugs being tested that try to stop the abnormal proteins being produced. Only one drug – tafamidis – is currently on the market, helping patients by delaying the impairment of the disease. The interaction of this drug molecule in TTR was also investigated as part of the study and results show that it stabilizes the structure in a similar way to T119M. The drug causes a flip in the molecule that mimics the conformation of the T119M mutant and stops the tetramer dissociating. This could be very useful information for designing innovative drugs, and even possible cures, for the disease.