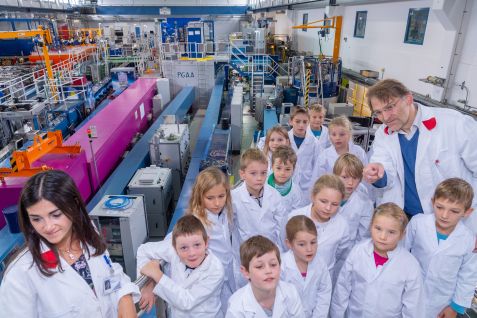 More than 100 happy children and the same number of parents step out of the research neutron source Heinz Maier-Leibnitz (FRM II) on October 3rd. The children benefited from a special guided tour during the door-opener-day of “Sendung mit der Maus” (The Show with the Mouse) where they built chemical elements and finally enjoyed a sweet and ice-cold surprise.
Like scientists the children put on lab coats and first went to the visitor´s window watching where the neutrons come from. 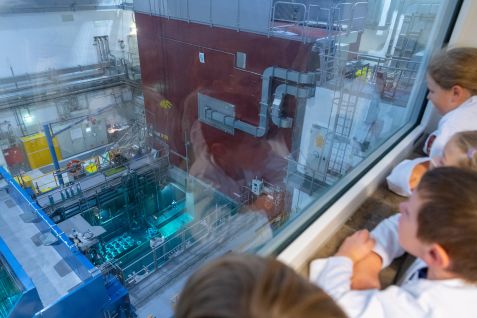 The children could look down to the blue pool during their tour of the FRM II. © A. Heddergott / TUM

Looking into the reactor pool, technical director Dr. Anton Kastenmüller explained to the children of the elephant-group how the neutrons are guided from the fuel element to the experiments, like light rays out of a microscope.

At the next station the children observed the work of the reactor operators. „That´s a small command centre “, Felix stated looking inside the switch room of the FRM II. Mainly the children asked questions about the shift work of the technicians who must be on site day and night even on holidays. 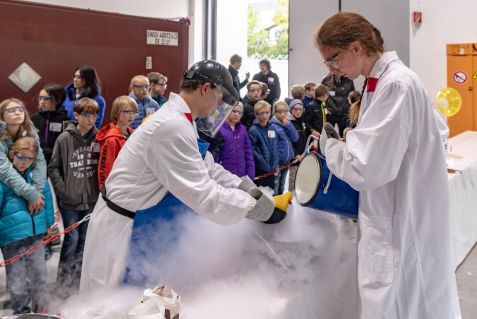 Using liquid nitrogen, the students cooled the ice cream, which the children could eat at the end of their tour. © A. Heddergott / TUM

After the tour, during a handicraft session, the children could check out themselves how the components of the atoms are assembled. They put together neutrons, protons and electrons with magnetic modules and created chemical elements.

The highlight finally was in the end of the day: home-made ice. Scientists of the Heinz Maier-Leibnitz Zentrum (MLZ) prepared chocolate- and fruit ice cream for the children with liquid nitrogen. 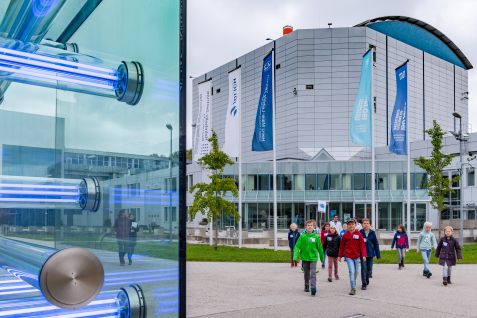 The kids got a special tour of the neutron source. © A. Heddergott / TUM

In the meantime, the parents listened to talks of employees of the FRM II and MLZ in the physics department of the Technical University of Munich. They learned facts about the construction of the neutron source and gained insights into the world of the scientists at the Heinz Maier-Leibnitz Zentrum by getting to know current research projects. „We parents have learned a lot, too “, a mother thanked the employees of the FRM II and MLZ also „for the willingness to work on a holiday “and the „dedicated performance “. 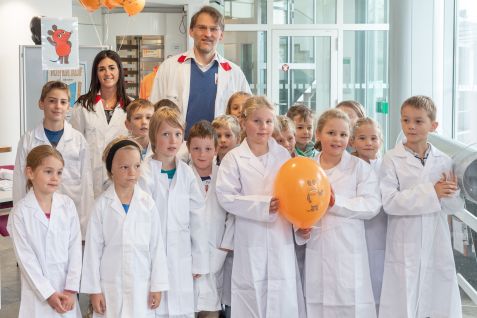 Dr. Anton Kastenmüller, Technical Director of the FRM II, and Silvia Muzio, working student at the FRM II, with the children at the open day for kids. © A. Heddergott / TUM

The children were entirely happy. „That was the best ice cream I´ve ever tasted “, Fin exclaimed after eating his ice. Of course, there was a second helping for each child.

The children´s program will be repeated at the open house day, on Saturday, 13 October, when the special guided tours for children with handicrafts and live-experiments take place another time. By the 3rd of October 2019 at the latest the Mouse will reopen the doors of the FRM II.

During the “Door-opener-day” of “Sendung mit der Maus” (The Show with the Mouse), a well reputed children’s series on German television, children and families all over Germany are able to experience “learning stories” live. On October 3rd more than a hundred different institutions, enterprises, research labs, associations or factories open their doors that usually are closed for children.