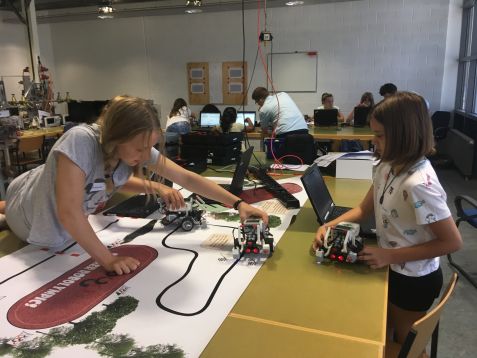 The girls had much fun while building and programming the robots. © FRM II / TUM

Like in the previous years, the Physics Department of the TUM, the Gerda-Stetter Foundation, and the Heinz Maier-Leibnitz Zentrum (MLZ) collaborated again to offer this three-day program called, “Physics and technology made easy” especially for girls from the age of 11 to 13 years. This annual summer break event “Mädchen machen Technik“, from the Technical University of Munich, invites girls to discover exciting and challenging natural sciences and technologies. From 30th of July to first of August, seven girls enjoyed three days full of fun, light, and new exciting things.

On the first day of the program, the girls were literally enlightened on how light works. Andreas Hauptner from the Physics Department taught the girls that light beams, just like neutrons, can be directed, bend and influenced. The girls tried this by themselves using a lens to determine the path of a light beam. They also polished their own acrylic prism to let light pass through and see how it bends and separates light into different colors to form a beautiful rainbow. To end this colorful day, the seven girls built a robot (LEGO Mindstorm) with some support from volunteers of the Gerda-Stetter Foundation. 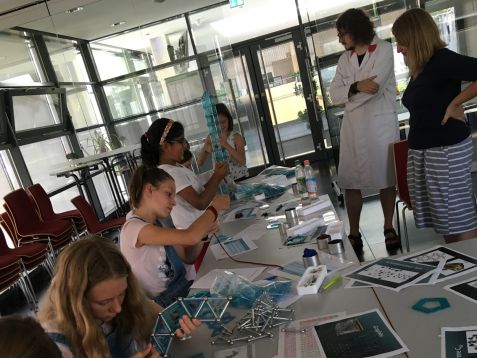 Much concentration was needed when recreating the elements with magnets. © FRM II / TUM

The second day, the program continued bright. Our seven girls kept on using light to see how it can be diffracted and learnt that neutrons can be used in the same way to get information about the structure of an object. The girls used lasers to determine the thickness of their hair by measuring the distance of the light wave. This shiny day could not finish without installing light sensors on the robots they had built on the day before. These sensors helped the robots to follow varicoloured tracks. The girls used the laptops that the Gerda-Stetter Foundation had provided to program their robots and, although the programming was not an easy task, our hard-working girls did not give up until they got the program to work. 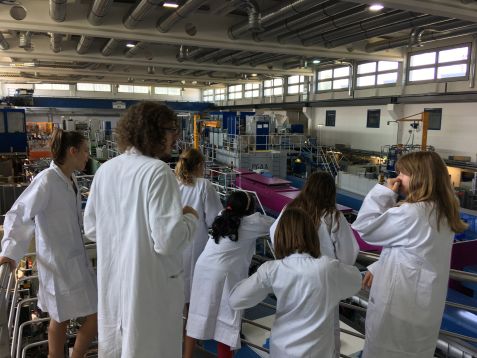 The highlight war the tour at the Neutron Research Source. © FRM II / TUM

The final day started with an interactive program with our scientist Marina Ganeva from the MLZ. Everything the girls had learnt on the previous two days about light refraction and diffraction helped them to understand how particles and especially neutrons behave. Sensation! The young scientists looked surprised when they saw the short explanation video about the experiment at the instrument NECTAR where scientists investigated more than 70 million years old dinosaur eggs. In addition, our seven girls got to know different types of chemical elements and applied their knowledge to create their own favorite element with different sizes and colors of magnets. The ultimate highlight was in the afternoon, when the young scientists in their lab coats set off on the guided tour to the neutron source. They went to the visitor window, command center and to the gallery of the neutron guide hall. The many new impressions were more than enough to answer all the questions the girls had.

By the end of the visit, there was just enough time to pack their belongings and say goodbye, taking with them an unforgettable three-day experience and an awaken curiosity in light, neutrons, and technology.