High-grade biopolymers can be obtained from wood, which could replace fossil resources as a base material for a variety of products. This has already been achieved on a laboratory scale, but industrial use is currently not profitable. At the Heinz Maier-Leibnitz Zentrum (MLZ), scientists from Forschungszentrum Jülich and RWTH Aachen University want to optimise the sustainable process and make it cheaper.

The production of biopolymers requires gentler processes than, for example, the production of cellulose for paper manufacture. So-called ionic liquids are suitable for breaking down wood in a gentle first-treatment step, and for making its components accessible for further processing. The researchers are now able to show in a time-lapse film how an ionic liquid bursts open wood fibres within a few minutes. They also used neutron scattering to clarify what happens at the nanometer scale and where the process could be improved.

Wood is a valuable raw material and its use extends beyond the production of furniture or paper. This plant material contains two of the most common organic compounds in the world: cellulose and lignin. The biomolecules have great potential as a sustainable alternative to fossil resources. This is because cellulose and lignin can be used to produce numerous basic chemicals such as sugar or aromatic compounds. These in turn can be used to create high-quality products, such as biodegradable plastics, light and resistant packaging, flavourings, or adhesives and resins used for instance in the construction of wind turbines or vehicles.

However, it is not easy to isolate cellulose and lignin in a suitable, high-quality form from wood, because the molecules are in the form of long and sometimes branched chains which are interwoven with each other and barely dissolve in water or other common solvents. The energy- and water-intensive cooking processes used in paper production to extract cellulose are comparatively aggressive and produce mixtures that are not suitable. Some of them contain polymer components that are too small, some have residues from the cooking liquor and bases. Scientists from the Jülich Centre for Neutron Science at Forschungszentrum Jülich, together with colleagues at RWTH Aachen University, therefore took a close look – in the truest sense of the word – at a sustainable and gentle process. 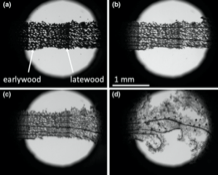 They used ionic liquids, salts that liquefy at temperatures below around 100°C and have both polar and non-polar properties. The liquids allow wood to swell and partially dissolve. This takes only a few minutes with a wafer-thin piece of beech wood and the liquid EMIMAc, as the researchers showed with an optical microscope. Cellulose fibres, lignin molecules and hemicellulose are then accessible for further processing steps, for example by enzymes.

Ionic liquids are expensive, but can be largely reused. By optimizing the soaking time or temperature, for example, their use could become cheaper and therefore more commercially viable for industry. In order to understand more precisely how liquid and wood interact, a much more powerful magnifying glass was needed than an optical microscope, in the form of what is known as neutron scattering. Neutrons were employed for this, the building blocks of atomic nuclei produced for research purposes at the Heinz Maier-Leibnitz Centre in Garching. Forschungszentrum Jülich operates an instrument at its outstation there for measuring structures on the nanometre scale.

At the neutron small-angle scattering instrument KWS-1, the researchers followed the process continuously for the first time and were thus able to divide the process into individual stages and measure them in space and time. First, the ionic liquid penetrates through pores and channels in the dry wood and wets it. Then the molecular wickerwork of lignin and cellulose begins to swell, which is shown by nanometre-sized holes in the material. Finally it literally bursts open, allowing the liquid to penetrate further. This process subsequently makes the cellulose accessible to enzymes, which can break it down into easily soluble, readily processed, medium-sized so-called “oligomer” molecules. In addition, the lignin and other substances, such as hemicellulose, can now also be separated.

“The efficiency of the process already proved itself to be very pleasing,” reports Dr. Henrich Frielinghaus, instrument scientist at KWS-1, “but now that we know exactly how long the individual stages take, the process can be accelerated and thus made more cost-effective. There was also still potential for optimization in terms of temperature.” Next, the researchers plan to investigate more closely the chemical changes that take place during the process. To do so, they will combine neutron scattering with a spectroscopic method. Within the Jülich Aachen Research Alliance – Section JARA-SOFT, scientists at Jülich and Aachen are researching other materials and phenomena of so-called “soft matter” in addition to biopolymers in a multidisciplinary approach.