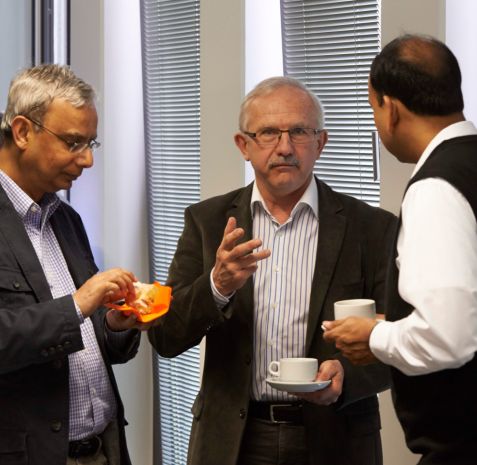 In 2008, when plans for spallation neutron sources took shape in several countries, little knowledge existed to exploit energy-dependent effects for neutron imaging methods.
Scientists of FRM II took the initiative to organize a first workshop where scientists from all over the world discussed potential instruments and scientific methods that would make use of the time-of-flight spectrum of neutrons at spallation sources, but also of other methods using specific neutron energies. With energy measurements, different elements can be identified and isolated within large conglomerate samples; even stress and strain in technical samples can be detected and measured.

Originally planned as a one-time occasion, this first workshop was so successful that it was repeated almost every year in different countries. NEUWAVE (Neutron Wavelength-dependent imaging) has helped to establish neutron imaging instrument projects called IMAT at ISIS (UK), RADEN at J-PARC (Japan), VENUS at SNS (USA) and ODIN at ESS (Sweden), and to develop most of the available knowledge about energy-dependent imaging.

NEUWAVE-6 has now returned to its place of origin in Garching, where 42 experts from 13 different countries discussed recent developments and future plans in an open atmosphere. The last day, the scientists visited the FRM II research reactor of Technische Universität München, where the new ANTARES neutron imaging facility provides a velocity selector and a double crystal monochromator for energy-resolved measurements with a thermal and cold spectrum, and the NECTAR facility, where a fission converter provides high-energy fast neutrons for the examination of very large samples.