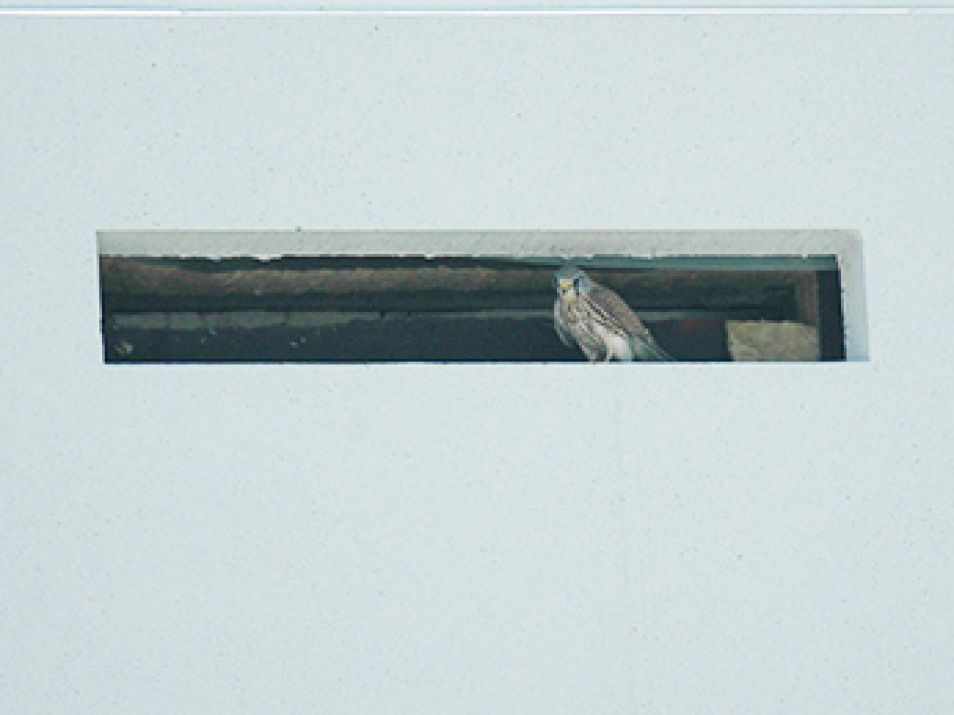 Why build a nest in an eyrie if there is such a nice drainage shaft?

Most of my species prefer the fancy city life of Munich. They build their nests into recesses, shafts, and windows of high buildings and steeples. And then they boast about the oh-so-spectacular view of the old town. Munich – who can afford to live there nowadays? The most popular penthouse cavities are already occupied. Many of the still vacant nesting sites are either blocked or dangerous to access! Just a short time ago, I thought I found the perfect place for my beloved hen and me: a small shaft on top of a high building. But who put thorns and spikes there? I bet it was those humans. For me, they are just underdeveloped birds. They don’t have any plumage and their useless wings just dangle from their shoulders. They must envy us so much! To be able to take off from the ground and fly wherever you want – they can only dream about it! Maybe this is why they begrudge us building our nests on their buildings. But that’s fine for me. I never fancied the frantic city life of Munich. “Let’s move to the countryside!” I proposed to my lady. And so we did. We flew north, further and further, until we found the perfect place.

Common Kestrels are not too common in Garching

Since the beginning of April, we have been living here in Garching. It’s nice here. Looking at all the baffled human faces when they spot us, we feel like a celebrity. Often they watch us from a window in front of our house. Occasionally, they hide their faces behind a rectangular apparatus with a giant eye that clicks and flashes every now and then. I guess we Common Kestrels are, in the end, not too common here in Garching. Weird, as many of us live in Germany. 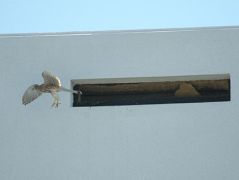 Kestrel flies away from its nesting site © Christian Müller

We built our nest in a shaft of one of the buildings. It seems that the house is still in the making. Every day, a dozen humans come to hammer and drill. However, we don’t mind. At least the shaft was ready to move in. There was also a human-made eyrie on another roof, but my lady preferred the shaft. And since she is the mistress of the nest, I entrusted her with the choice of apartment. Thank heavens we don’t need as much time for nest-building as the humans need to build their house. Four small eggs are now lying in the nest. My beloved wife will care for them until the chicks hatch. In the meantime, I will go foraging. There is still a lot to hunt here! Numerous field mice stroll the large green areas. Hmmmm, yummy small field mice! They are becoming scarce in the city now. No wonder, when the humans plaster all the grassy lands with buildings and streets. Although there are some buildings here, the colourful meadows and forests that surround us compensate for the grey concrete and are home to our daily meals. 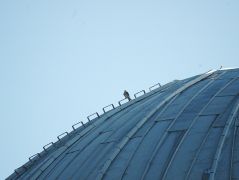 Enjoying the spectacular view from the Atomic Egg © Christian Müller

Eggs in immediate vicinity of the Atomic Egg

Carrying our lunch in my beak, I am on my flight home now. Before returning to the shaft, however, I like to fly round this giant egg just in front of our house. Every time I see it, it leaves me tweetless. What kind of bird may hatch from it? I have not seen its mother nearby; maybe she stopped hatching it. I land on the egg. It feels strange – cold and made of steel. As if the egg was just another lifeless building.

Every day, I watch so many people in the egg-area. Some of them wear white coats. Most of the time, they head for the largest building right behind the egg. What could they be doing inside it? From the look on their faces, it seems they do all sorts of fascinating stuff in there. These humans… they have invented so many ways of killing time!
The lunch fidgets in my beak and wakes me up from my little reverie. Puzzling over the humans, I almost forgot that my lady must be starving already. I launch from the egg and fly home.

The pair of kestrels built their nest in the drainage shaft of the new UYW building.

Why build the nest in an eyrie if there is such a nice drainage shaft?

Ready to take off

Kestrel flies away from its nesting site

The male forages while the female protects the clutch

A beautiful day to explore the new home

The kestrel on the Egg

Enjoying the spectacular view from the Atomic Egg 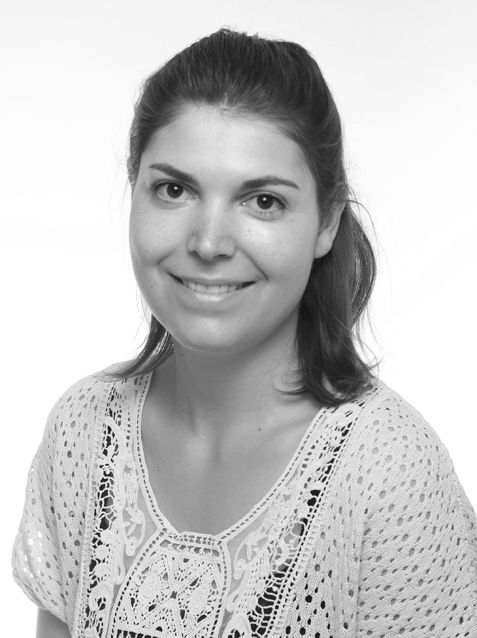