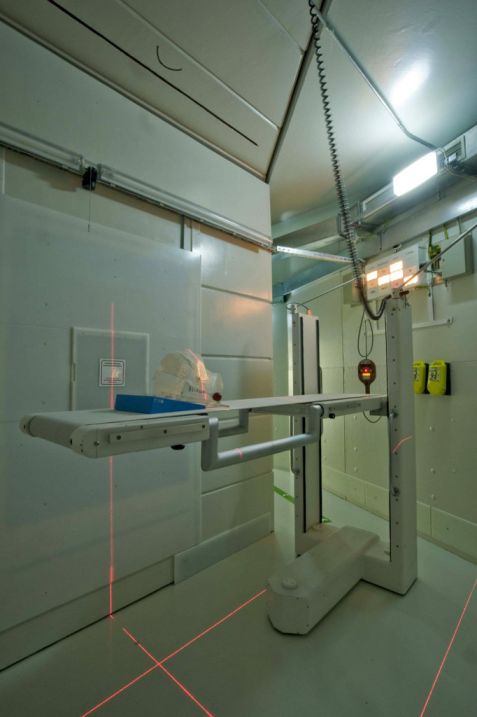 The tumour irradiation facility with a face mask for the accurate positioning of the patient. © W. Schürmann, TUM

Fast neutrons can be used for the treatment of malignant tumours. There are major differences between particle radiation and the types of radiation typically available in hospitals, especially with regard to biological effectiveness and tissue penetration. Due to their energy spectrum, fast neutrons produced at FRM II have the highest biological efficacy of all currently available neutron beams used in cancer treatment, comparable only to the effectiveness of heavy ion therapy. This advantage comes at the expense of penetration depth, which limits the application of fast reactor neutrons to near-surface tumours, typically breast tumours and melanomas. Fast neutrons are produced by means of a so-called converter facility in the reactor pool. Here, thermal neutrons from the reactor core hit two converter plates containing uranium-235 (U-235), and thereby induce fission processes in uranium. Fast neutrons with an average energy level of 1.9 MeV are released and travel unmoderated on a direct pathway along the SR10 beamline to the irradiation facility MEDAPP.

With a flux of approximately 3.2 × 108 fast neutrons cm-2s-1, a maximum area of about 27 cm x 20 cm can be irradiated. The shape and size of the beam field can be adjusted individually to the tumour being irradiated using a multileaf collimator. The patient is positioned on the radiation table so that the tumour region marked out by the physician is covered by the neutron beam. Treatment time depends on the prescribed radiation dose; usually this is up to three minutes per field. Overall, only four to five radiation exposures per field and patient are usually necessary. The University Hospital of the TUM, the “Klinikum rechts der Isar” (MRI), Department of Radiotherapy and Oncology, is responsible for conducting the therapy; FRM II only provides the irradiation.

Previously at FRM I (“Atomic Egg”), a total of 715 patients underwent radiation treatment with neutrons from 1985 to 2000. At FRM II, since the commissioning of the irradiation facility in 2007, a total of 131 patients have been treated. Depending on the clinical indicators involved, neutrons represent a good palliative, and for certain tumours also a curative form of radiation therapy.

In addition to providing radiotherapy treatments for tumour patients, MEDAPP is also available for use in a range of other life science experiments as well as in technical applications. Besides fast neutrons, MEDAPP can also provide a purely thermal spectrum with an especially low addition of higher energy neutrons by removing the uranium converter plates at the entrance to the beamline SR10. The neutron flux is then around 2 × 109 cm-2s-1.

The particularly large beam cross-section of the SR10 allows the irradiation of larger objects, such as groups of cell culture flasks or track-etched large-area films. This allows, for example, the boron distribution in thin film whole-body cryosections of mice and rats to be measured.